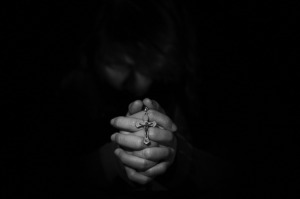 It has been a season of rest.  Surprisingly I found myself with no words to share.  To my faithful followers, thank you for checking back every so often even though I’m sure you wondered what happened.  Nothing.  And that was the point; I had nothing to say.  Why try to manufacture words when you feel like there’s nothing to write about?

Now, I have a wonderful thing to share.  I’ve just returned home after speaking at a women’s conference at the church I grew up in; I was a member of this church for almost 26 years prior to my husband and I moving after retirement.  It was good to be home.  Being one of the speakers was both honoring and terrifying at the same time and I spent no small amount of time working on what I would share.  As a last minute thought, I borrowed some 3’x4′ silk declaration banners from a friend to take with me; I have some banners of my own but I had forgotten them at home.  I’ll get to that in Part Two.

Banners being used in churches were new to me until four years ago.  We went to a conference where someone gave a workshop on the use of banners.  They can be used for simply declaring the goodness of God during a worship service, for using as a prayer cloth, for pointedly addressing specific topics (the subject of which is the theme of a banner) and so on.  I wanted banners with me in case.  I didn’t know in case of what, I just wanted them with me as I’ve witnessed their use becoming a powerful change agent.  God shows up sometimes in quite astounding ways.

As we gathered for prayer prior to the conference with the pastor of the church on Friday evening, I had to ask permission to use the banners as not every church is familiar with their use.  After a bit of discussion, this gracious pastor granted permission, asking that I give a brief explanation of what they are (only silk and paint, nothing special), and they hold no special meaning other than being used as an outward expression of an inner adoration or commitment to the Lord.

The theme of the conference was, “A Well Full of Water,” so it seemed fitting to wave a beautiful banner named “Living Waters” during worship that night after a brief explanation.  The night progressed with testimonies from two women, powerful, living examples of what God does best: transform lives.  Both of these women desire to be used in ministry and, after listening to their stories, I have every confidence that God will indeed use them.

Their stories evoked much emotion.  I’ve found it’s almost impossible to listen to someone’s story without causing some level of emotion to rise up as their sharing causes instances of similarity to surface about your own story with God.  He’s quite powerful that way.  As we ended the night, three of us gathered to debrief.  Please keep in mind that I’m recalling all of this in hindsight now; at the time, we had no inkling of what God was going to do.

As we discussed the evening, it was apparent that we each felt God was moving in hearts as only He can do and that there might be something He wanted to address in the women in attendance.  I can’t even remember why we landed on this word, but the word that resonated with us all was forgiveness.  It came up in our discussion a couple of times.  Suddenly I remembered that I had brought my friend’s banner called “forgiveness” with me.  I threw out a suggestion for it’s possible use the next day.  We ended our discussion with the fact we would all sleep on it, praying that Papa God would either open the way for the banners use or not.  Simple.

Early the next morning we came together once again to pray prior to the conference beginning afresh.  “Did anyone get a check on the use of the banner?”  No checks, so we decided quickly we would use it and what we were going to do.  I want you, the reader, to understand we inserted a plan into the agenda that had no prior inclusion or thought.  It was a result of something being “coincidentally” available and hearts open to God.

We began once again with worship, only this time I gave instruction regarding the use of the “Forgiveness” banner.  I quoted Colossians 3:12-13 (NLT): “Since God chose you to be the holy people he loves, you must clothe yourselves with tenderhearted mercy, kindness, humility, gentleness, and patience. Make allowance for each other’s faults, and forgive anyone who offends you. Remember, the Lord forgave you, so you must forgive others.”

I instructed the women that perhaps there were some who needed to take a step toward forgiving those in their lives, not that the wrongs done did not hurt or harm, but that we are to follow Christ’s ways concerning forgiveness.  “If anyone desires to do business with God this morning, I ask you to make a move — step out of your seat, come forward, and simply walk under the banner of Forgiveness.”  It was most definitely a God-moment, so I don’t completely remember the exact words, but you get the idea.

It began slowly with a couple of women coming forward.  Another leader and I held opposite ends of the banner and simply moved it gently above each woman.   We prayed.  My instructions weren’t specific enough; instead of walking under and through, each woman came under the banner and stood, some remaining for many minutes.  Some held their arms high, some stood with head down, others collapsed to the floor in sobs.  Something powerful and amazing occurred that morning as women humbled themselves under a simple banner and took care of business with Daddy, some forgiving for the very first time, others reminded of a long-forgotten piece of forgiveness that needed to occur.

95% of the women in attendance went under that banner.  Watching them transform before our eyes gave us witness to miracles taking place.  They would walk under in full control.  As they stood under the banner, changes began.  There might be a quiver of the lips or tears would begin to roll gently down their cheeks.  It was a mighty move of God through the group as woman after woman took a step of submission before our God and He met them there at the front of the sanctuary.  Breathtaking.  Wondrous.  Powerful.  And there was not a dry eye in the place.

In the hours following, a number of women shared with me the transforming power of forgiveness and I learned a strong lesson from God about being part of such gatherings.  I went to that conference all conflicted about the word I had to share.  I prayed.  I waited.  I pondered.  I wanted to make sure that I knew that I knew that God wanted that message to be shared.  Yet, what I learned was that the power and glory of our God in heaven, the God of the universe, didn’t need me and the word I shared, anyone’s word for that matter.  Yes, the shared words over the entire conference were fine but they weren’t the most important things.  The most important thing was we invited Him into our space, made room in a full agenda, unknowingly, and through something quite as simple as a painted piece of silk, the power and might of a loving and gracious God came down from heaven — and spent a little time with His daughters, freeing them in a new way.

This site uses Akismet to reduce spam. Learn how your comment data is processed.

ask change disappointments faith fear god Graham Cooke healing hope Jesus Jesus Christ postaweek2011 prophecy provision rock salvation saying yes to God spiritual freedom spirituality strength the Body of Christ trust trusting God truth Walk with God
© Linda Wallenius and http://justencourage.com, 2015. Unauthorized use and/or duplication of this material without express and written permission from this blog’s author and/or owner is strictly prohibited. Excerpts and links may be used, provided that full and clear credit is given to Linda Wallenius and http://justencourage.com with appropriate and specific direction to the original content.
Loading Comments...
%d bloggers like this: